Q: Hi Nicolai, thanks for taking the time to do this interview. How are you?
Nicolai: I am really good thank you J. On tour at the moment with Agent Fresco and Katatonia and everyone is so nice and friendly, and man they can play! Loving the tour life so far.

Q: You're about to re-release your debut album 'Inmazes' through Mascot Label Group. How are you experiencing  the release, with the record coming out on a bigger scale than before?
Nicolai: It has been funny to follow on the sideline. When we released it initially we were doing it all by ourselves with the help from our manager, and this time around there’s so many people pulling strings to get the record out there.

Q: How would you describe VOLA, for those who haven't heard of the band yet?
Nicolai: I think we sound like a mix of Meshuggah, Porcupine Tree and Mew and not getting to close to any of those bands either. Genre wise most people label us as progressive metal but I hope that we’re hard to put in box.

Q: For those about to give the record a first try, what can they expect to hear on 'Inmazes'? Nicolai: They can look forward to big and catchy choruses, groovy guitar riffs and lush soundscapes with loads of keyboards.

Q: This being your debut record, how did you experience the creative and recording process? - Any noticeable learning points that you encountered this time?
Nicolai: The creative process in the beginning of writing an album is my favourite part of making albums. Asger (lead singer and guitarist) is a really good songwriter and he usually has a lot of great ideas for songs, but we also make some stuff at home that we send to each other. But the most fun, for me at least, is when we sit altogether and work on new ideas. That was basically how “Gutter Moon” was written.

Asger is the mastermind behind recording and producing our music, but it was his first time doing a whole album as a sound engineer, so he learned a lot doing it by trial and error and reading about techniques online. I think ‘Inmazes’ ended up having an individual sound because of Asger doing it himself and he will be even quicker and better next time around.

Q: The video for "Stray The Skies" has just been released, which looks really cool. Can you tell us a bit more about the song and the video itself?
Nicolai: The video was made by my girlfriend Anne and myself. It’s drawn on Ipads in a program called Procreate and is made up of 8 individually drawn pictures per second. So it took a really long time to make, almost a year working on it on and off. Thematically wise we tried our best to follow the music both directly and abstractly so that the music and video hopefully becomes something more than the sum of it’s parts.

Q: 'Inmazes' being a re-release might mean that those who have been following you for a while have to wait a little longer for new music. Are there any plans for new music, or have you already started working on new material?
Nicolai: We have started writing some demos and it’s been really inspiring getting the songwriting going again. Can’t wait to work on it some more when we come back from touring.

Q: You're currently on a tour with Katatonia throughout Europe. What are your expectations for this tour?
Nicolai: This is our first tour ever, so we really didn’t now what to expect. But this tour has been so great so far. So many people to play for, such nice venues and an insane nightliner bus and lot’s and lot’s of friendly people on this tour. It’s incredible!

Q: Unfortunately you're skipping the Netherlands this time around, but when can fans expect to see a VOLA show over here?
Nicolai: We hope to come sometime next year. It will be great! J

Q: So what are the plans for you guys for the near future?
Nicolai: Next year we’re going to focus on writing the next album and hopefully start the recording process as well. We also hope to do some festivals during the summer and maybe another tour in Autumn 2017.

Q: Last but not least, do you have anything else that you'd like to say to our readers?
Nicolai: I hope you’ll like our music and also thank you so much for doing this interview with us Jessica! 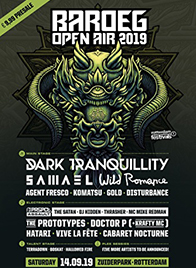